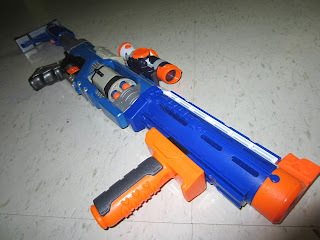 As many of you know, I like blue.  It's been a big reason I love the N-Strike Elite lineup so much.  I had toyed with the idea, long before Elite came out, of a blue Spectre and eventually ended up repainting one.  Now that we've got Elite blasters flowing onto shelves like the repainted Jolt and Rayven, I wondered if the 3 Store-exclusive blasters might get into the mix too. 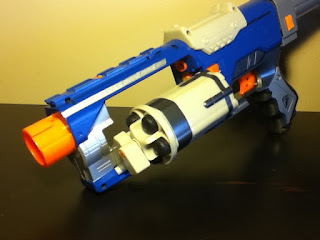 If you missed it, there are blasters exclusive to certain retailers.  Wal-Mart has the Spectre, Target has the Alpha Trooper, and Toys R Us has the Barrel Break.  I decided to take a bit of a closer look at the possibility of Elite-branded Store-exclusive blasters.  First, we need to consider the fact that N-Strike Elite will eventually replace normal N-Strike blasters (at least it's looking that way).  One could assume that with this replacement, we could see the Spectre, Barrel Break, and Alpha Trooper "Elite-ified", but there's a player that I think might have put a stain on this wishful thinking. 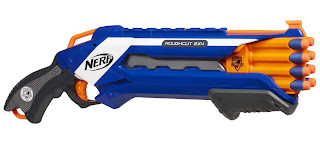 That being said, most Elite blasters are also having Slam-fire already built in.  The Alpha Trooper already has this.  It's reverse plunger system could be retooled (like the Raider and Recon) to have a direct plunger system in it to get those Elite ranges, too.  However the Spectre lacks this and already has a lower ammo capacity than the Maverick/Strongarm.  With all these observations, the future of the 3 Store-exclusive blasters looks very hazy and uncertain.  I almost think it's more realistic to think that eventually these 3 will get phased out with the rest of the N-Strike lineup.  They could get replaced by 3 entirely new store-exclusive blasters later on, but in general I get the feeling that these blasters aren't going to get that blue treatment.