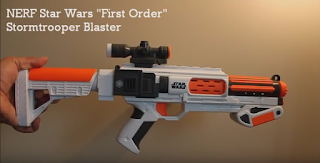 So here comes some new merchandise!  Nerf has come out with 3 blasters for the September 4th release of special "The Force Awakens" toys.  Of these blasters, the largest is based off of the Nerf Rampage (2012).  This First Order Stormtrooper blaster has all the same features of the Rampage, including Slam-fire, tactical rail, and stock attachment.  It comes with a 12-round All White clipazine that uses Elite Darts.  The Darts that come with this are red and have translucent red tips to look like "Laser Blasts!"

The grip, stock, and general size feels a little smaller than a normal Rampage, so larger users might want to stick to their existing blaster instead of shelling out another $30-$35 for this Star Wars version.  It's not a direct reshell, either.  I found this interesting.  The layout of the pump, the trigger, and the stock point are all slightly different from it's N-Strike Elite cousin.  It still loads from the side and can use other N-Strike Accessories and Clip / Magazine sizes.  I found this one at Target.

Below is a video review going over all the features as well as outlining differences in side-by-side comparisons with existing Nerf blasters.