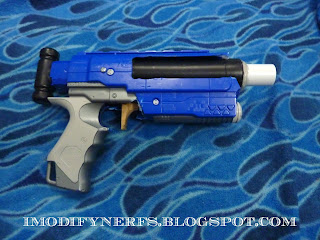 I wish more folks would do this with homemade blasters.  Last night I read a post on iModifyNerfs, a blog belonging to one of my readers.  It's a clever integration of the cool looking N-Strike shells we've come to expect from Hasbro along with the power and ingenuity of an NIC-style homemade blaster.  While he's still working on it, this picture really just caught my eye and illustrated the main problem I have with most homemade blasters: their lack of interesting aesthetics.

A lot of homemade blasters just look like a pipe dream, nothing I tend to dream about.  While they have excellent ranges and performance, I just think they look lame.

I've seen a few other folks attempt integrating homemade internals into Nerf blasters and I ALWAYS enjoy the end result much more.  iMod has really been doing a great job integrating the awesome power of homemade internals with the admittedly cooler looking N-Strike shell from a Raider CS-35.
\
Do me a favor, folks.  Hook me up with more creations like iModify's xRaider that he's working on.  I really enjoy finding creations by modders who seem to appreciate aesthetics as much as they do power.   In the meantime, I'll be keeping an eye on iMod's progress on the xRaider.
Posted by Reverend at 10:20 AM