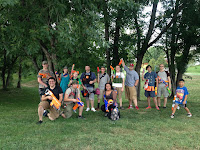 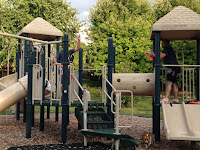 Over Labor Day Weekend, the Nebraska Nerf Legion met up at Southridge Meadows Park for a fun evening of Nerf! This is the first time I've hosted a Nerf game outdoors and my first outing with the NNL. I must say I was very pleased with how everything went and met a lot of great people. From Ralston to Norfolk, from Lincoln to Omaha, we had players show up from all around the area to sling those familiar foam darts all across the park.

Our first game was a simple team match in the middle of the park. Two teams of 7 squared off in a one-hit-kills elimination game that revealed the power of many of the customized blasters present. There were some epic shootouts between trees, as the dart pickup in the aftermath revealed localized areas of extreme dart spammage. After that first match, and after spending a good chunk of time retrieving darts, we decided to run some quicker games in the playground in the park. We ran several rounds of Attack & Defend and "Pistols Only" matches that proved to be a lot of fun.

You'll also notice that in nearly every photo I have of gameplay that there's a Corgi running about. Our new puppy (the small black, tan, and white Corgi) had a ball chasing players and her friend Weasley (the tan and white Corgi) around the park while we played. I imagine the players enjoyed being around these friendly playful pups during the games given their playful interaction with them. 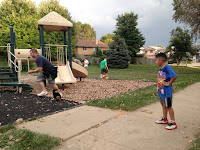 We wrapped things up earlier than we hoped thanks to a strong thunderstorm moving through the area. Actually, when the players were polled to vote if we should do one more or call it a night, I was surprised to see an overwhelming support to play another round as the thunder rumbled overhead. After one more pistols round in the park, we grabbed our gear, picked up the darts, and ran for the cars before the downpour kicked in. 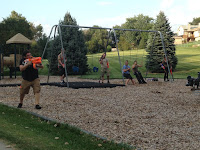 Despite the hot weather and the early finish thanks to the storms, I think it's safe to say that this event was a rousing success.  I didn't know if we'd have 5 people or 55 people, but I can't think of one complaint after the great time we had yesterday.  14 people made it perfect.  Big enough teams to run games, small enough size to manage easily.  Plus there were some cool blasters and setups on-hand.  From RapidRed / Hornet integrations to tactical vest layouts that would make an airsoft player blush.  I was also very happy with the new friends made at this event.  Connecting with other players from around the state, seeing the mods first-hand, and exchanging fire in my backyard park together made for a fun evening.  I'm looking forward to more outdoor engagements with the Nebraska Nerf Legion!