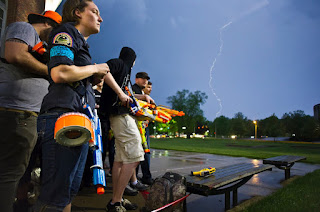 I don't frequent the Nerf Nation Facebook Page much these days, what with how they handled the Urban Taggers thing (or lack thereof) and just the general intelligence level of the posters on there.  However, I AM a bit of a photography nut, so when I saw the Shot of the Week entry with a Lightning Strike in the background, I was interested.  Then I noticed that woman's "USS Nostromo" patch on her bicep, which is from the film Alien directed by Ridley Scott.  He's got Prometheus, a prequel to Alien coming out this summer, so it was neat to see that patch show up.  Then I noticed her blaster... which at first glance I thought was a Raider, what with the 35 round drum on there and the blue color, until I was pleasantly surprised to see it was, instead, a blue painted Alpha Trooper.

Generally, the Nerf Nation page has frowned upon "modding" and done a good job of keeping modded stuff out of the limelight, especially when it comes to their Shot of the Week winner.  Perhaps it's just an honest mistake that they missed it.  Maybe they liked the photo so much that they decided to let it slide.  Or maybe, like some folks would like to think, it's a sign that there will be an N-Strike Elite version of the Alpha Trooper. 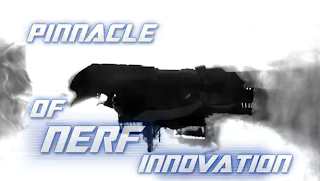 The idea has been tossed around, what with the recolored versions of Nerf Blasters acting as the backbone of the N-Strike Elite lineup.  The Retaliator, Rampage, and Stockade are all upgraded versions of the Recon, Raider, and Barricade.  The only real "new" design is the Hailfire.  There's not enough info on the Firestrike to make much sense of that fella, but it seems pretty clear that it's at least related to the Nitefinder.  So the idea of more N-Strike blaster designs being utilized as N-Strike Elite designs doesn't seem all that far fetched. 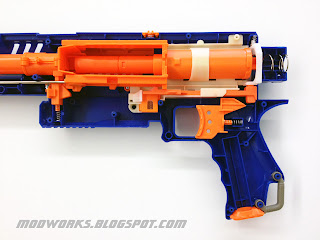 The internal pictures of the Rampage seen over at SG Nerf are a clear sign that Hasbro's engineers are more than capable of retooling internals of a Reverse Plunger blaster into a powerful Direct Plunger.  In theory, this could probably be applied to the Alpha Trooper quite easily.  The only problem lies from a marketing standpoint:  for Nerf to make an Elite blaster from a Target-Exclusive blaster like the Alpha Trooper, they would likely have to make Elite Blasters from the Spectre (Wal-Mart) and Barrel Break (Toys R Us).  There's room in the Spectre's design to improve it up to "Elite" specs, and probably the same level of upgrade for the Barrel Break... but let's think back to the special color series for some history on this too.

The Whiteout Series (Wal-Mart), Clear Series (Target), and Sonic Series (Toys R Us) have all been  pretty popular.  Wal-Mart, Target, and Toys R Us also each have their own store-exclusive blasters, but only the Barrel Break crossed over into the Sonic Series while the Spectre and Alpha Trooper never got to the Whiteout or Clear series, like many fans had hoped.  This DOES, however, provide proof that Hasbro doesn't have to develop stuff for each store.  Which means, in my books, that they could go ahead and make an Alpha Trooper for the Elite series without developing one for the Barrel Break or Spectre for their respective stores. 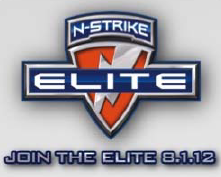 But the Elite Series is much more than just a recolor, like a Sonic Series Barrel Break.  If the Alpha Trooper were to be made into a Target-Exclusive Elite series blaster, they'd also have to retool the internals as well as likely retool/add some accessories.  I'm not certain that this is as easy to do, which kind of throws a wrench into those plans.

Either way, it's an interesting topic that has had my thinker going for awhile.  I'd appreciate any of your personal insight to this matter, just from a speculative standpoint.
Posted by Reverend at 11:53 AM