Back with a Throwback!

Hello everyone!  Even with my break from Nerf and Laser Tag only lasting a few weeks, I kept finding myself eyeing my workbench and wanting to get back into the swing of things.  Once the weekend hits, I'll be back at it with some updates and projects that I've been itching to return to.  In the meantime, I was going through a bunch of my older stuff and found a little project that's been in hiding for 3 years.  With it being Thursday, I figured a little Throwback action was in order before I jump in with the new stuff. 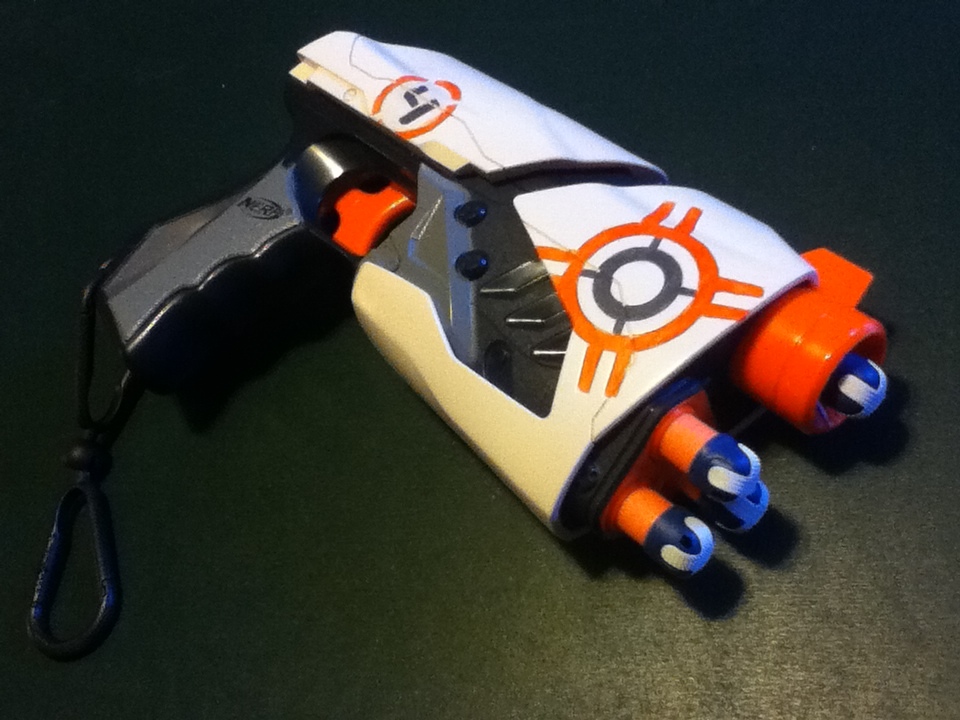 This is my Dart Tag Sharp Shot.  I finished it in January of 2012.  I painted it to resemble the sought-after Whiteout Series colors and utilized the layered shells and engraved logos to full effect to simplify this repaint.  After spray painting the shells white, I hand painted the orange and dark gray colors into the bits of the shell.  To be completely honest, this repaint kind of started my "make it look stock" craze that eventually led me to build things like the Elite Longshot.

Throwback Thursday doesn't end there.  The whole reason I'm sharing this is, as I was going through and cleaning out old unused files, I found a video that I never published on YouTube that goes over the Whiteout Sharp Shot.  It's kinda funny seeing my old video skills (or lack thereof) in full swing with the old outtro music and logos.

Check it out after the jump!

A Bit Tied Up

Instead of dropping off unannounced, I thought I'd give my readers (all 5 of them) a heads-up.  Activity for Tactical Tag has admittedly dropped off recently.  I figured an explanation was in order.

Long story short: I'm busier than I ever have been and, as a result, Nerf and Laser Tag have taken a back seat.  While I don't know exactly when things will clear up, I wanted to let you know that I'm not gone... just a bit buried.  Once I'm reloaded, I'll be back at it with some updates, videos, and projects that have been on the back burner for far too long.

I may still update a picture or two on my Facebook page, but once I'm able to, I'll have major content for the blog and YouTube!  In the meantime, there's a bunch of great blogs, websites, videos, and pages out there to keep you entertained.  There's a list of my favorites on the right side of this blog, so check 'em out if you haven't!  Or, if you wanna take a trip in the WayBack Machine, you can go through almost 4 years of content from Tactical Tag.  Either way, keep at it and I'll be back as soon as I can!

I knew it when I saw it.  So did everyone else.  Nerf didn't need rocket scientists to think up a small compact blaster for the MEGA line.  They simply hooked a helium tank up to a trusty Nerf Jolt and then added an extra piece of dart storage on top.  You can literally remove the red/gray shell and there's a big orange Jolt underneath!  The name suggests that this blaster would knock you off your socks, but at the end of the day, the concept of MEGA BigShock is just that.  A Jolt for MEGA Darts.

Don't let that deter you, though.  Even with no silly gimmicks, tactical rails, or fancy ideas, the BigShock is still a lot of fun.  I've been mixed on the MEGA lineup and the dart design for awhile now, but this blaster doesn't try to be anything earth-shattering.  Maybe that's what I like about it: it's just a compact MEGA Dart slinger that feels good, has some decent power, and doesn't look half bad, either.

Maybe that's what's surprising and what makes me actually prefer this blaster to the Jolt.  While the concept is identical, the BigShock packs more of a punch and just feels more substantial.  Don't get me wrong, there will probably never be a better super-compact blaster than the Jolt... except for the Secret Strike AS-1 of course.  The Jolt just sort of "poofs" an Elite dart out... whereas the BigShock kinda thwack's you a little more.  The dart is bigger and the power is better.  Sure, you can't hide it in your pocket, but it's a great little hand cannon.

There's already a bunch of great reviews out there, so below I've linked one from my buddy RandomShadow09.  Nothing against other reviews, but his also conveniently links to a range test at the end, too.

Or you can check out the one I made after the jump!