So a lot has happened recently with "Elite Fakes" and "Firefly Tech Hoaxes" making their way around the 'net right now.  As of October 23rd, there's all kinds of information out there that pretty much nail down some rumors that I had originally dismissed as being fan-made or fake... but I'm simoutaneously happy and disappointed that I was likely wrong about those.
﻿
﻿

Thanks to my "Big 3" blogs (SG Nerf, Urban Taggers, NM&R), we've got more than enough evidence and information that confirms a few things for us... at least in MY books.  The N-Strike Elite lineup was said to include a blaster called the "Stryfe" that we now have an image of courtesy of the box for an Elite Firefly Tech Clip set.  There's also been high-definition photos of the Elite Jolt and Elite Reflex that have been broken down and inspected by fans that I have come to trust.

The reason I had originally dismissed most of this stuff as "Fake" was based on what we've seen from the Elite lineup so far.  I expected N-Strike Elite logos and renamed blasters to be the lay of the land when a blaster's legitimacy was in question.  However, with these blasters that I previously doubted now being seen alongside other legitimate information, it can only mean one thing: this stuff is happening... somehow! 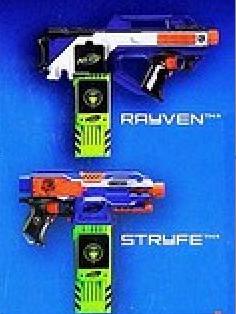 This also means we're getting a repainted Rayven too.  While I'm not sure if there will be internal differences with these simply renamed blasters, it is neat that some of my favorite blasters, plus some really nice looking new ones will be coming out.  The Firestrike too, that I've mentioned in this earlier post, is one I'm especially looking forward to.

So while nothing has been exactly confirmed, it's looking like Christmas is coming early for those who love Nerf News! 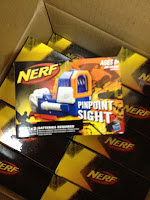 UPDATE
There's been a flood of new information about all of these new Elite products.  Nerf Mods & Reviews has an excellent breakdown of everything coming out and SG Nerf has news on the Elite Pinpoint Sight that's in Singapore.
Posted by Reverend at 9:30 AM