Oh wait... we already knew that.  Urban Taggers, thanks to their intel, has got the scoop on LOTS of fun goodies, all of which I will weigh in on.  There's no point reporting what they already have reported, so I offer you my 2 cents on each of these awesome articles. 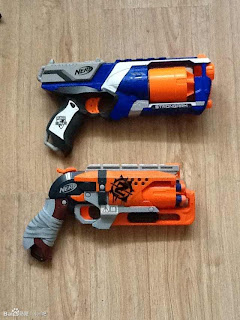 ZOMBIE SHOT
I suppose I've now got one thing to thank the Rebelle lineup for (after I questioned it's purpose in the first place).  The HammerShot in the new ZombieStrike lineup looks like a fun lil tagger.  I always appreciate those kinds of "Futuristic Six-Shooter" blasters that give a Trigun feel, and this one is no exception.  UT has a firing video up of it.  It's smaller than the Strongarm (as evidenced by the picture to the left) and has simple one-handed operation.  With this new blaster, Nerf has obviously aimed for the HvZ crowd, pun intended.  It also shows that all those Pink rebelle blasters may be in the running for "manly" repaints to begin with.

Check out the article on that one here> HammerShot on YouKu 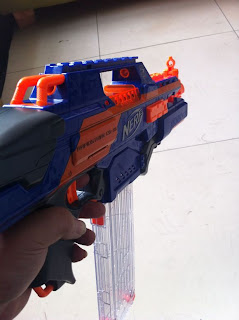 More pictures have surfaced of the RapidStrike CS-18.  You know, if there's one thing this blaster has continued to do it's been to confuse me with their Naming Schemes with these blasters.  At what point do you decide to put a "CS-" tag on a blaster?  The Retaliator, Strongarm, a dozen other blasters recently developed, none of them have numerical designations.  Now the RapidStrike has the Clip System "CS-18" tag on there.  I suppose it's trivial at this point, but the inconsistency just bugs me.  Does it mean I'm not looking forward to the RapidStrike?  Oh hecks no!  Probably going to be one of my favorite blasters!

Check out the article on that one here> RapidStrike Pictures 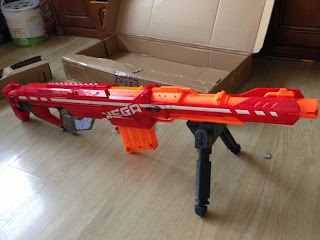 As if we weren't already excited just to see how this thing works, it appears that Tony Stark has picked one up.  There's finally a firing video of this blaster that answers a lot of questions.  Put in the "NERFER" password and BOOM, firing demonstration.  Sounds like a long prime for it (no surprise there) but it still sounds muffled.  I'm kinda scared to see what this thing can do with it's obvious Air Restrictor removed.  If it's hitting 90-100 ft ranges stock, I can't begin to imagine what it's like with the leash off.
Check out the article on that one here> Centurion Firing Videos