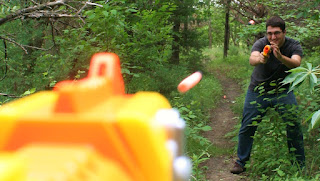 Flywheel Driven blasters have been around for awhile, but they're still pretty new to the Nerf lineup.  With the Barricade's successful release in 2010, they've released more blasters using this simple firing system.  These blasters, like the Rayven, Nitron, and Stryfe, have also been successful on shelves.

Haters are always gonna hate, though.  There are clear advantages and disadvantages to having a Flywheel-based system.  I figured, now that we're a few years deep into the Flywheel System with Hasbro's Nerf blasters, we could break down the obvious features of the Flywheel that make some folks adore them and others want to give them a bath in Kerosene.
The Cons: