Everyone's got their take on the news of this CS-18 RapidStrike... so after I had some time to sit back, read others thoughts on it, and let the hype surrounding it settle a little, I figured it was my turn. 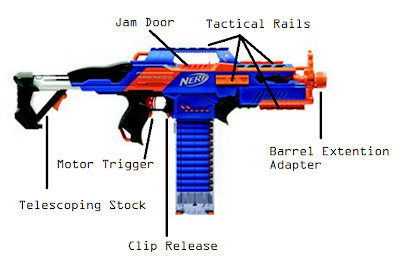 From a quick breakdown of it's physical features, we can see the Trigger, Motor Trigger, Clip Release, Barrel Extension Adapter, 4 Tactical Rails (likely a 5th on the opposite side), Jam Door, and a Telescoping Stock.  I'm not even going to begin to try to figure out the clear clip with the blue foam, black tipped darts, but I'm hoping it's not some kind of specialized ammo.  Aesthetically, you can say it "looks like this" or "looks like that" all you want.  There are some clear features on this blaster that resemble other Nerf Blasters, which is quite common with Nerf anyways.  I would say there's a high amount of Stryfe, Stampede, and even some Longshot in this blaster's design.  One thing that stuck out to me was how gigantic the 18 Round clear clip looked, which is a sign of how much smaller this blaster really is than it could appear to some.  It has all of the aesthetic features of a big bulky blaster, but if you put the magazine and trigger grip into perspective, this is still smaller than a Stampede, maybe even smaller than a Longshot or Longstrike.


All the arguments about "it's a fake" or comments about it's "Elite" colors being wrong are pretty much tin foil at this point.  There's not a lot of strength to them considering how little we know about this, but they're shiny enough to get everyone's attention.  All I can say is that whenever this blaster comes out, I may have a new flywheel-driven favorite, given it's solid rifle-design look.

As for the name, some folks have thrown the idea up of this being a "Full Auto Flywheel Blaster".  If that's true, I think it's odd to include a motor trigger on this blaster.  It could work together, but having a full-auto version with a toggle for power seems a bit clunky to me at first.  However, if you think of "Full Auto" and "Nerf", the Nitron from the Vortex line comes to mind.  It also had a motor trigger with a complicated and intricate full auto system in there.  The name "RapidStrike" certainly gives the idea of a rapid-fire capable blaster, so it doesn't seem too far fetched.  Oddly enough, Nerf already has something dubbed "Rapid Strike" as a mission kit with a Retaliator and some 18 Dart Quick Reload clips.

I would guess that, given all the info I've looked at and the examination of the ONE photo that we have, that this will be a Flywheel driven blaster, Full Auto or not.  With the secondary trigger along with the design of the rifle just ahead of the Jam Door, kind of underneath the rear portion of that side-mounted Tactical Rail, you can see that there's even space above and below where the barrel would line up on this.  It's likely room for it's flywheel system.

The blaster does bring up a few development questions about Nerf, though.  There are all sorts of Tactical Rail positions on this thing, almost as many as the Stampede... and yet the N-Strike Elite lineup still lacks a decent array of accessories for these rails.  Additionally, Nerf has been focusing a LOT more on flywheels since the Barricade came out a year or two ago, but fans shouldn't forget that there's still a lot of Direct Plunger blasters Nerf has recently come out with.  Unlike many fans that see this blaster as a move away from plunger system blasters, I think it's just new ground Nerf hasn't covered before.  The Strongarm, Firestrike, and RoughCut are all new blasters still using the tried-and-true Direct Plunger system and they're great blasters in their own right.  Even still, blasters like the Barricade, Rayven, and Stryfe are doing quite well as flywheel blasters, so it only seems right that there's a large rifle-style blaster with flywheels now.

My advice?  Keep calm and Nerf on.  With the Centurion and the RapidStrike lying in wait, you can be sure that this summer we'll have some cool new blasters yet again.