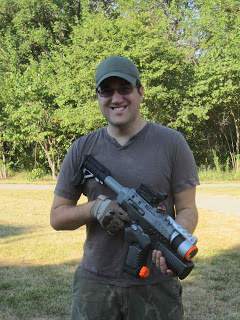 I wanted to take a minute as we close out 2012 to reflect and thank all of you for your comments, input, support, and ideas that have made this blog so fun to run!  We started things off with ToyFair 2012 and all the goodies that came along with it.  The unveiling of N-Strike Elite, the Lazer Tag Augmented Reality system, and the Pyragon news that was first revealed RIGHT HERE on Tactical Tag!  I really feel like that post propelled this blog forward both statistically and on the Nerf blogging stage.  In March, I started working with Nerf Mods & Reviews and made some great friends along the way.  That spring I was blessed with the Combo Mount #4 from CTDYNE for my LTX and started planning our biggest season of Laser Tag yet for the MLTA.  Soon after, the LTAR was released over the summer and I got a few early to review and share with the world!  During the summer months, I built the LTX EF5 and helped others with projects at Mod Nights.  August saw the highly anticipated release of N-Strike Elite that continues to gain attention from all kinds of Nerf fans.  We had lots of great games, both Nerf and Laser Tag held over the summer and fall that I covered here to show you what it's like on my side of the blaster.  Another Halloween was spent making my costume: Captain America's "Avengers" costume, which was fun to make and play a few games of Laser Tag in!  With the winter, we got more new N-Strike Elite blasters and I've finished out the year strong with a gift from Xplorer!  To top it all off, Tactical Tag has recorded it's highest monthly pageviews record: 41,913 for December!!

Thank you to EVERYONE for making 2012 so much fun for this blog.  I keep posting because of the great support I get from YOU, and for that I am very grateful.  Thanks for the great memories in 2012!  Have a safe and fun New Year, everyone!
Posted by Reverend at 5:45 PM