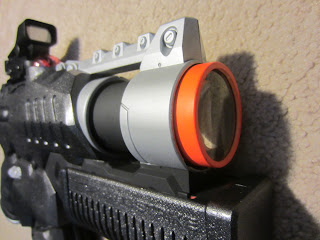 What seems like ages ago, I started a project called the "LTX EF5".  LTX because, well, it's using guts from a Phoenix LTX laser tag blaster.  EF5 because of the shell it's using: a Tornado Strike from the Super Soaker lineup.  EF5 is the highest classification of a tornado, so I wanted to make this a high-performance blaster... and it certainly has turned out that way so far!

I've been testing this blaster for several months now and done some adjustments along the way.  It's still not QUITE where I want it to be, but there are key points to it's performance that I love enough to want to complete it.  This is the most accurate blaster I have ever made, and it's all thanks to LazerBait and the lens he made that's in it.  The shell of this blaster was specifically designed to A: handle the larger diameter sniper-class lens and B: be compact enough as a small rifle to be agile and quick to use.

The problems I have run into have mainly been the build and design of some of the blaster's features.  Unlike the LTX DMR, which had many of it's electronic switches being utilized for the Trigger, Reload, and other features, all of the switches on the EF5 had to be built and installed.  The Trigger was the hardest part to fabricate, as the Tornado Strike lacked a physical trigger to use.  It's been holding up well, but there are still tweaks and refinements I'd like to make to it.  The biggest problem has been the reload function... which has been less-than-resilient in recent games to use.  As a result of my reload problems, I ended up shaking off the sniper lens on the front from all the tough failed reloading cycles.

There are a few things on my list to address before I call this one "done".


I'd like to have this all done in time for the MLTA's next game, which is at "The Base".  This will be an excellent final test for the LTX EF5, as it'll require long-range accuracy while still being small enough not to snag on the thick underbrush that this area is known for having.  To see the progress I made on this blaster up until now, check out the links below!  These are Tactical Tag only videos (no YouTube Links), but I hope to compile them all into a "Build Video" that shows how this blaster has come together!