Forgot to tell ya...

Not that it's relevant to Laser Tag, Nerf, or any of my hobbies, but enough folks have asked over the past couple months that I thought I'd clear things up.  After 2 years of dating, Laser Tagging, Nerfing, and general adventuring, I took a knee on an ice rink on December 30th, 2012.

When we first met, I was pretty bummed out because she had a boyfriend at the time.  Then, when she was single, I had a girlfriend.  Things lined up for us on January 1st, 2011 so just shy of our 2 year mark, I took her ice skating at a local rink, cleared the ice for the Zambonis, and took a shot at proposing.  My sister and brother-in-law took photos of the whole thing and I really couldn't have asked for things to go better!  Everything went to plan, including the "yes" part!

She's always been supportive of my hobbies, too and frequently gives me a run for my money at games.  On top of that, our families get along better than most best friends do, and family is very important to us.  It's been a no-brainer for awhile, but I just hadn't gotten around to popping the question until recently.

We don't have a date set yet, as I don't want to burden her with wedding planning whilst she completes her final semester of Grad School, but we're aiming for May-June of 2014. 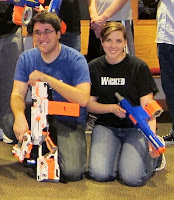 I couldn't ask for a better companion to share life's adventures with!