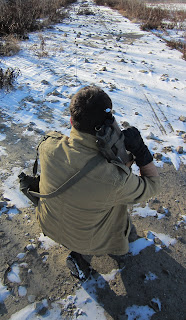 A fresh coat of snow has covered the area where I live.  With a Nerf game and a Laser Tag game coming up this weekend, I hope at least SOME of this white stuff will stick around.  While it won't effect the Nerf game (as we're playing indoors), it is fun to have some snow on the ground during outdoor Nerf Games.  Especially when it's fresh, it can make tracking your opponent a bit more like a form of hunting.  By the time we get to Sunday (when our game is scheduled), there should've been plenty of time for local kids to have run around in the snow and mess up that opportunity.

It's been awhile since I've had a good snow day game, though.  Generally the temperatures are too cold for our batteries to last very long in the wake of a fresh set of snow.  That, and weather around here can be unpredictable, making it tough to have a decent turnout with enough of advance notice for players.  And with it getting dark out earlier in the evening, it limits the days that I can throw an impromptu snow game.

So my question is this: do you guys ever plan outdoor Nerf or Laser Tag games in the snow?  How have those events gone for you?  Just curious!
Posted by Reverend at 12:24 PM