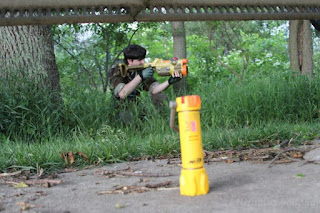 Ever since I started working on my first recasing for a Laser Tag blaster, I couldn't help but think "Hey, wouldn't it be cool to mix Nerf and Laser Tag elements into one game?"  I've tossed the idea around a few times only for logic to come back in and knock it down.  Well, it's time for another bout with this crazy concept and I would really like some of your feedback and insight to these ideas I have.

There's really two main concepts I can think of to blend the two games.  One is Nerf-focused while the other is Laser Tag focused, but they both utilize an element of the other type of game to enhance the scenario.  There are challenges and potential problems that both concepts face as well.

Read my two ideas after the Jump


Laser Tag Concept:
The laser tag games I host are mostly outdoor based.  Generally, our combat occurs between 150 and 400 feet thanks to the range and accuracy that our laser tag equipment provides us with.  However, instead of a "one hit kills" game type, players have a set amount of health points that are shaved away as they are shot.  For instance, most games we do with the Phoenix LTX and LTAR give players 25 points of health.  Once they're out of health points, they're out of the game.  Simple elimination.  What gets tricky is when we get TOO close... to the point where we established the "Tap Out" Rule.  This is a stealth maneuver that allows those who are sneaky enough to take a player out with a simple pat on the back.  The rule is only good if the enemy doesn't realize you're there until you've given them that reassuring pat on the back that implies "How on earth did you let me sneak up on you?"  If the Tap Out is successful, the enemy player has to turn off their gear (instant kill) regardless of their health, and count themselves out of the game.  It's been fun using it, but I wanted to add an element to it.  Allow Nerf Blasters (mainly as sidearms) in games to extend the Tap Out rule of the instant kill to these blasters.  It would encourage folks to utilize the range and accuracy of their blasters.  There are two main problems I foresee with this idea.  The first being that the player may not feel the dart, especially if they're not expecting it.  The second being that when a player is trying to use a Nerf blaster to get a close-range kill, the sensor on their laser tag blaster might not be visible.  We could outfit small dart blasters to mount onto our laser tag blasters, but that's a lot of work to do for an armory of 18 blasters.

Nerf Concept:
The Nerf games I host are mostly indoor based.  Generally our combat occurs under 75 feet, so there's not really range problems.  Our games are 1 hit kills and we generally have either elimination games or tally-recorded games with respawns.  We almost always have two bases or starting points for either team and have done a few scenario games where an item has to be defended or an objective must be met.  The concept for integrating laser tag into the Nerf game is to have one or both sides have a laser tag sensor that they must defend.  The opposing team have a few laser tag blasters among their Nerf blasters that are used to take out the other team's sensor.  Since the sensors have a series of hits that they record, it would take a bit of time for the team to wear down the health of the sensor with hits.  Objective based games typically tend to be more interesting as they force the players to actively pursue a goal.  With this laser tag gear integrated into the game, it would help keep players exposed as they attempt to land hits on the other team's sensor that they are trying to defend.

This is where YOU come in!  Let me know what you think of my ideas.  If you've got other suggestions or ideas, feel free to chime in!
Posted by Reverend at 9:53 AM