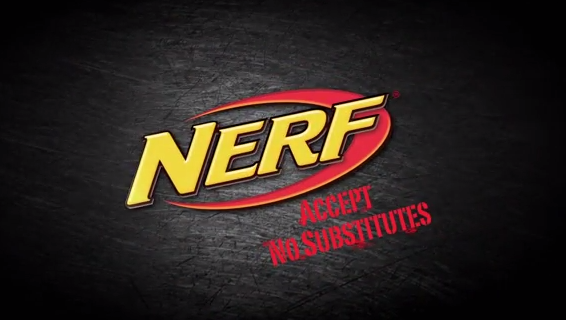 So remember when I was worried about "Nerf or Nothin" going the way of the Dodo?  Turns out they're just using the "Accept No Substitutes" bit that I feared would replace the age-old slogan and just put it alongside instead.  Nerf or Nothin is apparently the following:

The commercial goes on to use 4 blasters as examples of these staples that make Nerf what it is.  The Rapidstrike is their example of "speed", which I would agree with.  The "undeniable power" is from the Crossfire Bow... which I could argue against, although I think they just wanted to plug the ZombieStrike lineup.  The "Distance" is achieved by the Mega Centurion, despite it's fail-tacular fail-ness.  The "Accuracy" is headed up by the Mega Magnus, which I suppose works.Then it tags that "Accept No Substitutes" bit at the end of the commercial, just before they tell you about getting some free darts.


Long story short?  Crisis averted.  Just looks like Nerf is starting to accumulate more slogans.  After seeing what all the fuss was about the "Accept No Substitutes" bit... I can't actually understand why Nerf bothered using this slogan if they're just going to keep the "Nerf or Nothin" tag anyways.  Even with more trademarks, copyrights, and other legal jargon aside, it really hasn't changed the blasters or anything!  What a relief!

According to "BlasterLabs", who has a degree in advertising and 15 years experience, it sounds like the new tag could be a transitional point between new and old.

"I would argue a "tag line" is just that--it's whatever is used at the end of an ad to "tag" that communication. In this video, "Nerf or Nothin'" has been used as body copy, but "Accept no Substitutes" is clearly the tag. This makes sense as a transitionary tactic. They don't want to lose the equity they have in "Nerf or Nothin,'" so they could simply be using both in the short-term to transfer that equity to the new line and to explain its meaning."

Either way, it's curious to watch, and will be interesting to see how they use both (or perhaps just the new one) going forward.
Posted by Reverend at 10:02 PM