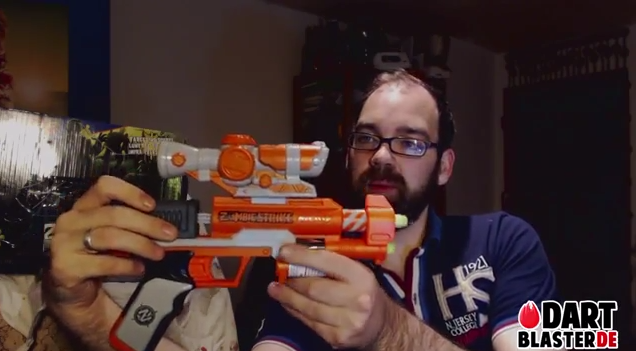 Yesterday evening I watched a review by DartBlaster.de about the "ZombieStrike Clear Shot", which is yet another recolored Nerf Blaster from the days of yore.  It's a Dart Tag Stormfire with that nifty ACOG-looking scope that we got with the Super Soaker Shotblast, also from the days of yore.  I liked the Stormfire when it came out, as it was essentially a NiteFinder in a cooler shell.  However, it's 2014 now... and most N-Strike Blasters are stepping up to the plate with 75 ft ranges.  However, according to the review DartBlaster.de did, this Clear Shot is getting the same ranges it did when it was released under the Dart Tag lineup, Pre-Elite ranges.

This is sort of a bummer for the Clear Shot, but even moreso for speculation about the highly anticipated return of the Longshot.  I had previously theorized that, with the Longshot's return, we would also get revamped internals that would reflect the new "75 Ft Range" standard that nearly every lineup for Nerf has been getting.  However, with this new information about the Clear Shot, that hope is in jeopardy.  Sure, it's not the end of the world if we get nothing more than a repainted Longshot that's missing the bipod, but it kind of diminishes some of the hype about that blaster's re-release.

I suppose it could go either way now, but I was less excited about a repainted Longshot and more looking forward to retooled internals that could be even better!  Which way do you suspect it'll go?
Posted by Reverend at 7:20 AM