State of the LTAR: Part 2 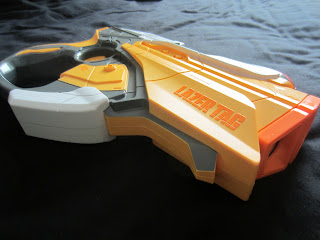 Well, I've had some time to think about this a little more, take in other folks' opinions on it, and I think I've not only confirmed what I feel, but have a better understanding of why things are the way they are for the LTAR.

If you've missed it, here's Part 1.  Most of what I was concerned with in the first part have merely been confirmed as to the current state of affairs for it.  And while it might seem bleak for the shelf-life of this blaster, there's still a lot of good things going for this guy.

Simply put, big marketing flop.  On the part of just box design, something that irritated and worried me from the start, it's an iPhone Laser Tag blaster.  Unless you have prior knowledge of the product, there's hardly ANY way for someone to see that this product can be used without an iOS Device.  This is a 12 gauge shot to the FOOT right off the bat for it's success.  Showing the blaster with and without the device attached would've made this system more accessible for purchase.  Laser Tag is already kind of a niche game in a world mostly dominated by Nerf, Airsoft, and Paintball... so to further limit your marketing to being iOS Device centric has proven to be quite the fail on the part of it's advertising. 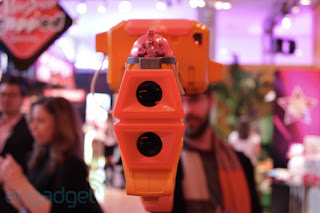 Gripes aside from the box design, the actual App isn't half bad.  For indoor games and just for playing solo games by shooting down "Augmented Reality" Aliens, Robots, and Spaceships, it's quite fun.  I have often played the game with and without the blaster actually on there and it's just a good fun time.  However, for outdoor use, which is primarily what my group uses laser tag for in the first place, aiming is quite the chore and the glare from the sun makes using the iOS Device even tougher.  While it's nice to have a health-readout and the ability to change weapons settings on the fly, there aren't enough advantages the iOS Device that outweigh the tactical disadvantage you get from the poor aiming and sunlight glare.

Here's where things really turn around for the LTAR in my long-term use with it:  what a GREAT standalone blaster!  Solid ironsights, great range, simple operation, quiet and stealthy performance, reliable features, and easily stored.  The LTX, while still a favorite among my group, tends to have issues with it's reload feature, has bright LED displays that can give away your position, and has an odd external design that make them a bit of a hassle to fit into our storage crates.  And, thanks to the dismal marketing campaign for the LTAR, they're more affordable than ever (to the point where I've thought to replace a few of our beat-up LTXs with LTARs).  The LTARs integrate seamlessly with LTX games and can even join LTTO hosted games, so it's really a great addition to bolster anyone's armory.

There's also WONDERFUL modding potential for the LTAR due to it's simple design.  While our group hasn't done much more than develop some add-on parts for a base LTAR blaster, I do have plans for recasing these blasters into other cool designs as well.  The fact that the LTAR has so few buttons but has made these buttons have multiple functions really makes this a great candidate to drop into another shell while keeping exterior buttons/selector switches to a minimum.  For example: the reload button can also be held down for 5 seconds to change the rate of fire from Single to Full-Auto firing modes.  The reload button also is used before the game is set up to select a team or it can be held down to activate the beacon to join a Hosted game from an LTTO blaster.  For those of you keeping score at home, that's 4 different functions for one button.

So, from what I've found... the LTAR may have been "tagged out" on store shelves due to iOS-Heavy marketing being undesirable for most folks looking for Laser Tag, the blaster itself is quite excellent.  On the one hand, it means that LTAR's are more affordable than ever and it's still a great blaster!  On the other, because it hasn't done well as far as sales go (due to all the clearance pricing I've seen on them in the short year it's been available), I fear that further development of the LTAR will flatline.  While it's not a good thing for the LTAR itself, it's good for those who know a thing or two about these so they can go out and buy them.  I had hoped that the new Lazer Tag blasters would be well-received and my job of promoting these blasters would be even easier, but the majority of players that come to our weekly games hardly know about them until I show them one we have on hand to use.  Sure, I could ask Hasbro to start paying me for my local marketing efforts with the LTAR, but I really wish they would've just been smarter about their advertising for it.

Long story short: don't believe what you see on the box.  Go buy one!  They're great blasters!!
Posted by Reverend at 10:41 AM