Ten Years in the Making! 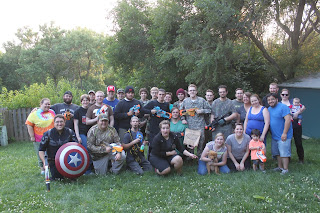 On July 3rd, most people were impatiently waiting for their Independence Day celebrations.  Cookouts, Fireworks, and get-togethers were planned for this big American weekend.  While the rest of the country was waiting, we were busy getting a leg up on celebrating the only way we know how: Laser Tag!

We kicked off the 10th Annual "Independence Eve Blast" with our usual pot-luck cookout.  I think this is the first time we've ever had dogs and babies at the game, though... so we all had a lot of fun!

We also enjoyed record turn-out for the event.  We had 32 in the picture but picked up another 5 through the rest of the event, so I was pretty stoked about the support we got.  I've been complaining recently of low turnout numbers but this event made me realize that these events are more about the games, it's about getting together with everyone.  Whether there's 5 or 35 players, it's still a good time.  In the same way that Nerf and Laser Tag enthusiasts tend to get too caught up or serious about their hobbies, I tend to get too worked up on the details of these games and forge to enjoy it.

One thing that made it easier to to enjoy was the return of some well-missed veterans.  Many good friends who have been with us from the start made it out to this event to celebrate with us.  Some of them don't even live in town anymore, so it was a real treat to reconnect with them and play alongside (and against) them in this awesome scenario that is simply known as the "Independence Eve Blast".  Many of them were THERE for the first one we held back in 2006, so it was great to have them here again! 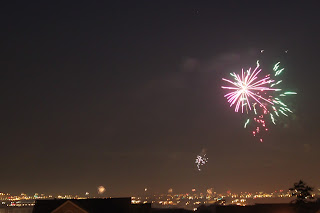 For those who don't know, this event is my FAVORITE one in the entire schedule.  Not only is there great food and lots of fun games to be had, but the event carries with it a unique atmosphere not easily recreated.  As the evening of Laser Tag goes on into the night, local fireworks explode overhead giving a sort of battlefield environment as players battle through flashes of light, the booms of shells igniting overhead, and the thick smell of smoke and gunpowder.  Its awesome to play under these conditions to make for an unforgettable evening.

2015 marks our 10th year doing this.  Here's a video I made from last years event in case you missed it!

Hope all my US readers had a Happy 4th of July!  And I guess all the readers in other countries will want to host games on nights when there are fireworks in the forecast.  It's a grand ol' time!
Posted by Reverend at 10:52 PM