Judging from this week's giveaway comments, the main thing on every Nerfer's mind is the N-Strike Elite blasters.  We know a few things, but there are some rumors floating around out there that, while I don't have much hard evidence to disprove them, I'll do my best to back stuff up with level-headed logic.  It seems to be the best weapon to use against crazy rumors.

That being said, here's what we can confirm based on info from ToyFair, Urban Taggers, NM&R, and Toy Spy.  Retooled blasters will launch the N-Strike Elite lineup this summer with two retooled blasters.  The Retaliator, which is based off the Nerf Recon, will get us a nifty 12-round Transparent Orange clip, foregrip, and a new stock.  The Rampage, which is based off the Raider, will get us a 25-round drum clip and (possibly) a transparent orange shield attachment.  Both of these blasters are slated to achieve ranges of 75 feet and use new "Elite" Darts, which have blue foam, orange rubber heads, and can work in any blaster.  We also know the Hail Fire is the third N-Strike Elite blaster slated for a release on 9-9-12.  This is a new design and has been said to be a "Semi-auto" blaster.  No other official details exist on this matter. 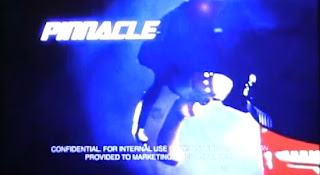 Now then, onto the rumors.  The Main rumor I see mulling around is the idea that the Longshot is coming back.  Not only have the folks with these hopes probably not read my "Why the Longshot Packed it's Bags" article, but the probably haven't seen the post on SG Nerf that's got a screen-capture of the trigger for this blaster.  So with that in mind, I think we can rule out that the 9-9-12 blaster is our long lost Longshot.

I'll stick to the facts until we hear otherwise, but I am willing to bet that this Hail Fire with Semi-Auto firing is a Flywheel-based blaster based on that shot of the trigger.  Regardless, everyone's question is how on earth are these blasters able to achieve ranges of 75 feet?  Until we get some shots of internals (which probably won't be until the line is actually released/in folks hands to open up), we won't know anything else.
Posted by Reverend at 4:42 PM